What Would You Do for an AMD Big Navi? 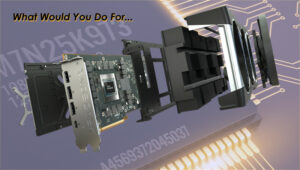 The parking lot was a wasteland of despair and broken dreams. I adjusted my mask before stepping out of the car, hoping that this would be my last stop… unsure if I’d have enough fuel to keep trying anyway. I shaded my eyes against the Winter sun as I peered at the smudged, hastily scrawled sign taped to the inside of the shop window:

I howled in anguish. It set off a cascade of mournful cries from other shoppers scattered throughout the lot. Some of them had already read the sign, and were reliving their trauma. Others simply knew from my anguish that they wouldn’t need to make the trip up to the sidewalk and read the painful words for themselves.

No, this isn’t a tale of the apocalypse, though some days it might seem like it. This is the tale of two failed launches. A story of woefully underprepared GPU companies, fraudulent shopworkers, desperate gamers, and the lengths that some clever people will go to if it means getting their hands on a next gen video card.

The Nvidia RTX 3070 Price Point is Amazing… if They Existed.

My strategy on launch day was simple: Realistic goals. Get the RTX 3070 from the biggest regional online retailer, picking a brand that did not ship across the Atlantic. Cut the competition in half. Be smart, be quick.

After they sold out, I was number 123 in the queue. 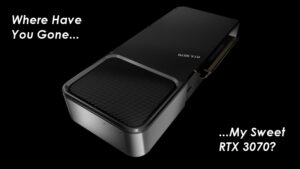 To be honest, no launch day strategy was going to work. Nvidia, and their GeForce distributors and partners, were woefully unprepared and understocked for the launch. And sure, I was right about the RTX 3070 price scheme, but it was a cold comfort. I might wait a couple weeks less than the 3080 squad, but I’m still waiting.

Frank Azor laughed at us all, and said the AMD Big Navi launch was locked in. They were ready for the demand, and would destroy Nvidia in short order. Except their launch was even worse in every way that mattered. So what happened?

On the Nvidia RTX 3080 side, their own FAQ on the matter admits two staggering facts. First is that despite their marketing reach, they somehow underestimated demand by an order of magnitude. And they thought that their old anti-bot strategy would work, so there was ‘no need’ for Captcha.

On the AMD Big Navi side, Azor was on social media laying bets that it wouldn’t just be a paper launch. He was wrong. One of the big online retailers reported ordering 4,122 cards and receiving 22. It was a disaster. 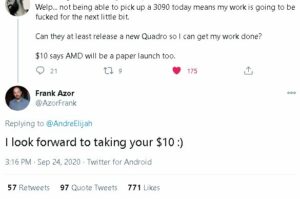 Then, the corruption. First, an MSI subsidiary ordered wholesale cards just to scalp on eBay. But let’s face it: That was one company who got caught, we have no idea how many other retail employees got away with similar antics. Then the flood of bot-bought GPU’s hit the secondary market at huge markups. And it wasn’t just the RTX 3080’s, the RTX 3070 price shot up by hundreds on eBay… no longer a very cost effective solution.

Some people have found creative ways to get their hands on the new GPUs, though it almost always involves at least some financial risk.

All of these methods revolve around buying complete systems with the cards already installed. This works for a couple of reasons: Demand is much lower, and the up front cash commitment is much higher.

There are three ways to handle such a transaction that will result in you getting your AMD Big Navi or Nvidia RTX 3070/3080.

The curse of 2020 manifested differently in each major gaming industry tech launch, from the PS5 to the new Nvidia and AMD GPUs. But in each case, the secondary market tried to take advantage of the resulting scarcity with prices ranging from unreasonable to gross.

Parting out whole systems is hardly a solution for the budget gamer unless they’re lucky enough to be in exactly the right circumstances. But it has worked for some, and should slightly relieve market demand on the GPU side while simultaneously providing a range of affordable PC parts to people who need them. If those whole systems are just gathering dust on warehouse shelves, putting them to good use right now would seem to be a better solution.

Let’s hope that we won’t have to resort to such measures in 2021. 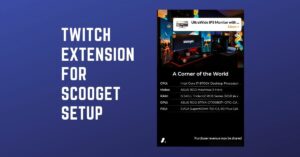 We’re pleased to announce that Scooget now allows you share your setup in Twitch. Under the Twitch platform, our Scooget extension features the display 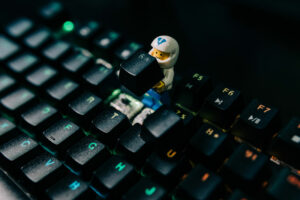 A Gamer’s Guide to Mechanical Keyboards 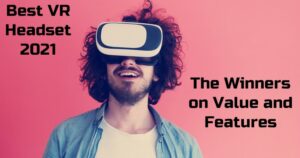 Best VR Headset 2021 – The Winners on Value and Features

To understand just how popular VR is going to be in 2021, you need to absorb this little fact: It’s mid January 2021, and